Quilt & Stitch closed on December 31, 2012. But don't worry. Stitch by Stitch, a full-service quilting, fabric and sewing machine shop, opens at the same location on January 21, 2013. Visit Margaret Millar and her friendly, knowledgeable, enthusiastic staff.  Check out our fun, inspiring workshops. We're an  authorized dealer for Baby Lock, Husqvarna-Viking and Pfaff sewing machines and sergers. We offer service for all makes of machines.  For more information, please visit http://www.stitchbystitchkingston.ca.
Posted by Quilt and Stitch at 4:16 PM No comments:

How time fly's - we've been having a ball at the store these past few weeks - we've got lots of new fabric in including some cute Halloween/Fall prints and tons of absolutely beautiful Christmas prints and panels!
Come on in!!
Lydia's quilts will be up for a few more weeks - I'm busy working on the fall class schedule - I'll let you know when it's ready.

I thought I should share this picture of Carolyn who spent a frustrating morning on her computer and came to work with two different shoes on!
Keeping you in stitches, Margaret
Posted by Quilt and Stitch at 3:34 PM No comments:

We were really busy last Saturday.  However, at some point in the middle of the afternoon things calmed down and we just had three women in the store shopping.  I was signing one up for a class and one of the other women was having fabric cut - she let us know that she was from Newfoundland.  Well, that started a whole conversation about one of my favourite shows "The Republic of Doyle" and how its brought more tourists to the island.  Now, you have to picture this - I had the one woman at the cash and soon the woman from NFLD. was beside her and then all three of us were deep in conversation - I turned to the first woman and said that I hoped I didn't offend her but, I wanted to thank the woman from NFLD for voting Liberal in the last election.  The woman from Kingston said not to worry she didn't like "you know who" and that led to all of us being in agreement.  Remember, the third woman was still wondering around not saying a word.
The two women left and the third woman came to the cash with her fat quarters.  I started talking glasses with her because she had to take her bifocals off to read the interact machine and she explained that she had readers but, was too lazy to take them out - the reason she had readers and not trifocals was becasue she did a lot of public speaking and at the podium with tri's she saw double!  Great reason - I was happy to leave things at that - I figured she was a prof.  But, no Judi had to ask "What do you do for a living?"  I cringed when she said - "I hesitate to say after hearing the last conversation".  That's right - not only is she a Conservative but, she is the Minister of Human Resources in the SH Government.
She was very gracious and I enjoyed the conversation the ensued.
When I told my oldest daughter what had happened, her comment was that I should never discuss politics at work - right you are!  When I told Adriana what had happened and what my daughters response to me was she said "Margaret, if we put duct tape on your mouth every time you said the wrong thing - you'd be taped up 24 hours a day!"
Here's a taste of Lydia Quigley's quilt's that we are thrilled to have hanging in our large classroom - drop in and visit - take a minute to sit and take in their warmth. 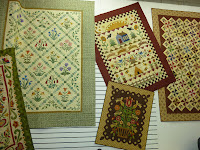 Keeping you in stitches...Margaret
Posted by Quilt and Stitch at 5:36 PM No comments:

BLOCK OF THE MONTH

Here are the two pics of the July Block of the Month - thanks to Marlene once again.
She has also made the following comment about the July block:
July – it says to cut 2 of the Fabric D (green).  You need 4 of these and therefore I didn’t have enough fabric in this package to make the 4.  Luckily I scrimped from other months and made out okay.

I try to get it right - so, sorry folks - if, you can't manage to get the extra from leftovers from previous months please let us know.
Keeping you in stitches, Marg 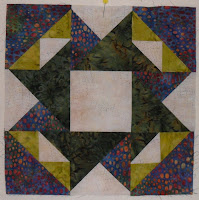 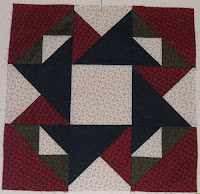 Posted by Quilt and Stitch at 12:03 PM No comments: 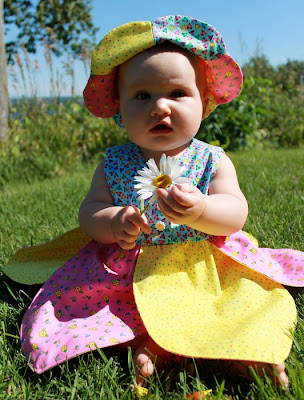 I
One of our favourite people made this beautiful dress for her new grand daughter. Both the dress and the baby are  absolutely adorable - thanks for letting me share this photo GS.
Marg
Posted by Quilt and Stitch at 8:32 AM 1 comment: