Since the merger I thought my life was calming down - it has been teetering on the verge of BORING - I thought I'd have never have another silly or crazy story to tell you.  Well, I was wrong!
We have had a bit of excitement around our place over the last couple of days - I think it started Wednesday - I don't know if any of you remember the trouble we had with bats getting into our house
a few years ago but, it was so bad that my daughter and son-in-law had to hire someone to seal the house to keep them out.  There was a bit of bad weather the other day and I started hearing noises
coming from the fireplace when I was sitting in the family room.  I thought it was just a bad wind but, when I looked outside it really didn't look that bad - so, I mentioned it to my son-in-law Glenn.  I told him that it sounded like birds nesting - but, no it was just my imagination.  The noise persisted until Glenn decided he needed to see what was in the chimney - I told him it sounded like birds - but, no he rigged the camera to an old tripod and then strapped it to a very long metal pole.
He had the ladder set up on the lawn and was going to climb up and film what ever it was that was going on up there.  Well, he is very afraid of heights so I offered to climb the ladder.  He was ok with that but decided he should check to see it the pole was long enough for the camera to get up high enough to film the top of the chimney - in theory it was a sound idea.  But, lucky for me the pole wasn't long enough.  We abandoned the attempt.
The noise continued - until tonight when Glenn actually saw the bird - yes it was a bird - in the chimney behind the grate.  I had to take the dog who was going crazy down to the basement and Glenn and Jessica called some of the neighbours in to help them coax this poor  bird out the back door.
So much for BORING!!
Keeping you in stitches,
Margaret
Thank you so much for your note Edith - don't forget lunch! 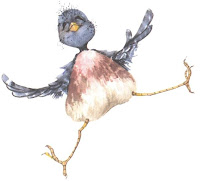 Oh my gosh Margaret- am i ever thankful you did not climb that ladder! I can just imagine the story you would have to tell.
(love the little picture of the birdie).